Here in Manasquan, we weather many a storm. My friends Steve and Dovie live down the road from me and their kids go to school with my kids. As we got to know each other through the years, they would often say,

‘Someday we want to renovate this house, we’re just not ready yet.’

When Hurricane Sandy hit on October 29, 2012. Steve and Dovie had 3 feet of water in their house. Sand and water had washed out their whole first floor. The Jersey Shore coast line was devastated and people were in shock in the aftermath of the storm, struggling to comprehend what happened to their homes and lives. All of the towns that were hit by the storm were coming together as communities helping each other recover and rebuild. The first priorities were to get cleaned up, get the utilities re-established and create a path back to a lively community.

Steve and Dovie had moved in with their family up north and were commuting back and forth to clean up, get the kids to school and assess how to put their life back together. That very first week, though, Steve came to me and said,

It was time for a complete house renovation. We agreed to change the whole style of the house, which had good bones but quite honestly lacked character.

This was not a typical fixer upper. Instead, the house would have a whole new look and feel.


The new flood elevations had already been released while we were designing but the town was still assessing how the zoning requirements would be affected. The property was a non-conforming lot and the current home was at the allowable building height. Our design was going to lift the existing house 4,’ for which we would need a variance from the planning board.

Ultimately, we worked with the board to get the variances approved and keep the project on course to start construction.


The concept was to lift the house, rebuild the foundation, gut the first floor and reconfigure the exterior. The transformation from a dated traditional-looking house into a modern, timeless home that turns heads in their neighborhood was underway.

The technical aspects of the new foundation included a new concrete footing and stem wall along with new shear walls on each floor.

The exterior foundation wall now had multiple flood vents to allow any future storm waters to come into the garage and recede with minimal damage.

After multiple discussions and sketches around the new vision for their home, we were able to redesign the whole first floor to add a den, foyer and laundry room where the garage had been. The new design also opened up their kitchen and living room which reflected the true modern exterior.

On the second floor, we were able to create a balcony and better views to the ocean in their master bedroom which they had always wanted.

On the third floor, we were able to create an entertainment loft with an outdoor wrap around balcony which is the best spot for fireworks in all of Manasquan.

Materials in this project were key.

To create a modern feel and a durable home, we installed thin profile modern windows, which are also resistant to water penetration from high winds. Since Steve and Dovie wanted a modern house that also felt warm, the design incorporated natural materials: cedar jointed plank tongue and groove siding, with a protective polyurethane finish, as well as grey cultured stone.

The other ingredients in achieving the right feel were color and lighting. LED low profile lighting on the exterior and interior created a warm glow at night; lighting in the eaves outside accented certain architectural elements. Within the house, certain rooms would seem to glow from a distance.

Steve and Dovie are absolutely thrilled with the final look and feel of the house, which resonates with their lifestyle.

It’s unlike anything else in the area. The most important aspect was we were able to get them back into their house with a new design…

…that implemented the newest flood regulations while creating the home of their dreams!

To fit you and your family's needs, lifestyle, aesthetic, and budget. 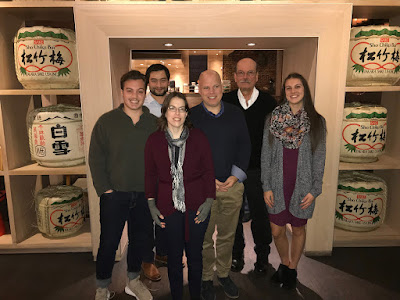 Office Holiday Party - 2017! We enjoyed our office holiday party this past December at Taka!  It's nice to get together, relax, and enjoy each other's company outside of the office.

Of course, the food was delicious too!   It's becoming a holiday favorite.

Doug - "Who doesn't enjoy discussions about the state of Modern Architecture and design over some hot saki!?"

Get the water view you've always wanted. How to See Your Future Views Before Your New Home is Constructed: Imagining Your New Dream Home You want to build a new home - one that meets your needs & wants.  So you're naturally working with an architect to craft your dream home.  Along the way you start imagining...how you're going to feel living there...how you're going to enjoy the space with family and friends...how well it meets your needs.

You start to wonder.  Am I going to have that water view I'm dreaming about?  What will I see from my balcony?


What if you could see what your future view might be like? I do more than plan the house for its views, I am able to show my clients real video footage from the height and location of their designed balcony or deck long before construction has begun!

How exciting that technology has allowed me to portray the experience during the design process - prior to framing the house.  Above is a sample video of the future vi…
Building in a Flood Zone?

What do I Need to Know? 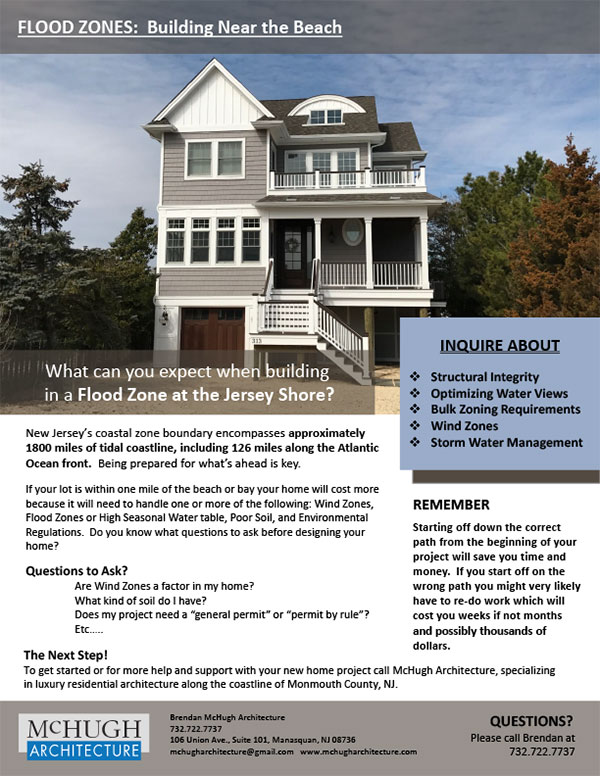 Download My Flood Zone Guide!
Before Renovating My Home...

What Should I Consider?